Welcome to the topic Are Fridge Magnets Still Popular?

Refrigerators have been around for years, with the earliest forms of chilling systems deriving from ice houses constructed next to rivers or streams, then evolving into ice boxes made of wood, and finally into the electric refrigerators that we are familiar with today. In addition, magnets have been present for many years. There are some naturally occurring magnets, such as lodestone, but the vast majority of magnets in use today are man-made.

Even before the development of the contemporary refrigerator, there were undoubtedly a lot of different applications for magnets. Whoever discovered that magnets would stick to iron or steel offered magnets yet another use that is both practical and entertaining. William Zimmerman was the first person to be granted a patent for refrigerator magnets in the 1970s.

He obtained a patent for the concept of utilizing little cartoon magnets that might serve both as a decoration and a practical purpose. However, the use of refrigerator magnets in the shape of plastic letters and numbers that had a magnet attached to the back of the piece began to gain popularity as early as the 1960s. These magnets were utilized extensively as pedagogical tools in a variety of settings, including homes and schools. In the 1990s, the use of complete words gave rise to what became known as “magnetic poetry.” This was because the words could be rearranged to construct phrases or even poetry.

Today, one can find refrigerator magnets in practically any shape and size imaginable. Because they can be produced at a low cost but are nonetheless appealing to a wide audience, refrigerator magnets are becoming increasingly popular as mementos and giveaways in marketing campaigns.

Many people feel a sense of melancholy when they look at refrigerator magnets because they remind them of simpler times when magnets were thought to have magical powers, and science experiments involving iron filings were awe-inspiring. And, of all, who among us doesn’t quickly give in to the temptation to affix a magnet to a steel surface, be it a refrigerator or something else?

Magnets for refrigerators are readily available, which makes it simple to amass a collection of them. Many people bring back memento magnets from their trips, while others concentrate on collecting magnets with a certain subject matter. Louise J. Greenfarb of Henderson, Nevada, is the proud owner of the world’s most extensive collection of magnets.

Are They Still Popular?

Twelve percent of American households do not have any magnets attached to their refrigerators, indicating that these individuals do not find magnets to be appealing. 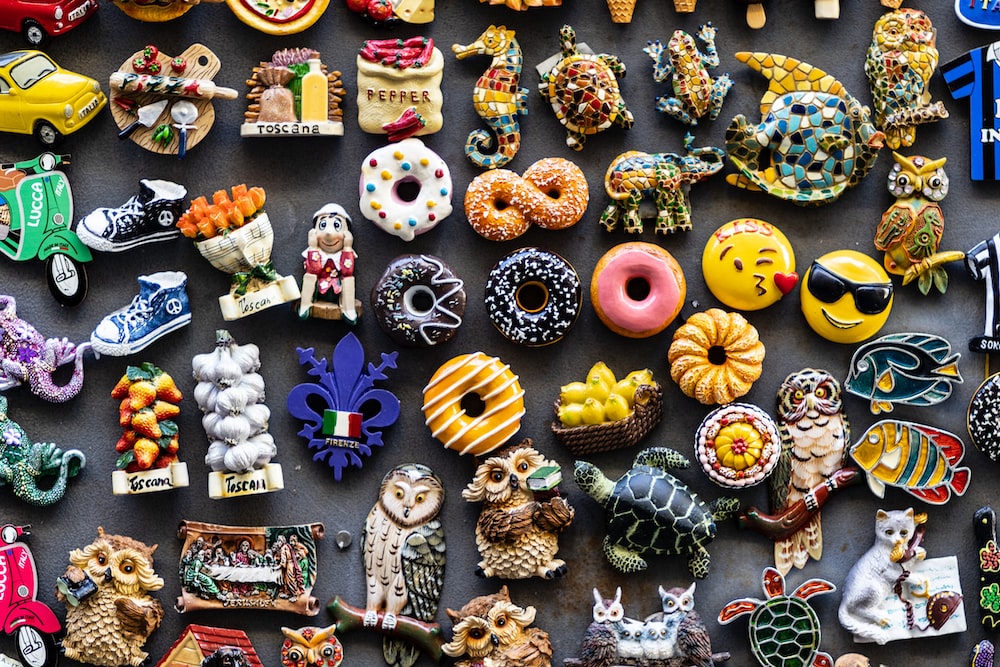 Used In Nearly Every Household

Every house has a refrigerator, and nearly all the people who possess refrigerators also choose to adorn them with a variety of colorful and interesting magnets. Magnets on the refrigerator can be used to show a variety of things, including schedules, calendars, contact information, and images of loved ones.

Why do People buy Fridge Magnets, and How Useful are they?

They are not only highly useful for pasting critical notes and to-do lists on the door of your refrigerator, but they can also be connected to other metallic surfaces around the home or office. This makes them extremely versatile. A lot of people do this with souvenir magnets, which are a nice reminder of all the places they’ve been and the things they’ve done.

What are Magnets made of?

Because some are employed as bottle openers or photo frames, magnets tend to be created from a wide variety of materials. This is because of the versatility of these uses.

Wooden magnets frequently have a country air to them, and wood is typically the material of choice for souvenirs that are handcrafted in tourist hotspots and bear the names of the locations where they were purchased and inscribed into the magnets.

Magnets sold as souvenirs typically representing well-known places are typically constructed of resin. This material allows for a fairly complex sculpture to be cast of the landmark or icon that the magnet is meant to represent.

Magnets made with a rubber cut design have a tendency to be whimsical and brightly colored. Due to the fact that they typically depict humorous depictions of well-known buildings or scenes, these are quite popular among younger generations.

Plastic or acrylic fridge magnets frequently display full-color photographs and are likely to be given out as inexpensive and cheerful keepsakes. On the other hand, the designs of metal fridge magnets typically feature embossed or engraved patterns, which have a very high-quality feel and make gifts that appear to be rather prestigious looking.

Why do People Collect Magnets?

Magnet collecting is a hobby that is enjoyed by many people because each magnet has a tale to tell; for example, if a collector has a magnet that depicts Buckingham Palace, it is obvious that the collector has either been to London at some point in their life or has aspirations of going there in the future.

At Hamfai, we take great pleasure in offering superior service to our customers and making the purchase procedure as straightforward as possible. We are highly approachable, take pride in our friendliness, and are enthusiastic about the production of high-end goods. We are always eager to think creatively to ensure that your order is completed to your exact specifications – give us a shot, and you will be shocked at what we can accomplish!

Have any questions regarding the topic Are Fridge Magnets Still Popular? Feel free to comment below.

Newer Why do People buy Fridge Magnets?
Back to list
Older Why Are Soft Enamel Pins So Popular? | 7 Best Tips!